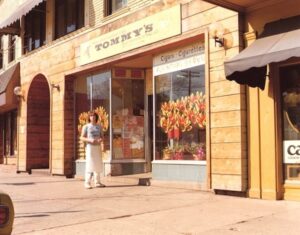 Coventry Village—or plain Coventry as most locals call it—is a street in Cleveland Heights, Ohio that is known for a kind of counterculture hippie vibe, its restaurants and bars, and its alternative bookstore. Growing up in the town next door, I spent many hours roaming the Coventry neighborhood when I was younger. It was where my high school friends congregated; we spent hours drinking the milkshakes and eating hummus and felafel (before most Americans even when what that was) at Tommy’s Restaurant on Friday nights. I loved visiting the stores that sold Guatemalan jewelry, incense, and pop culture kitsch. Even today, when my high school friends gather over the holidays, it’s usually over milkshakes at Tommy’s.

So I was delighted to find that Cleveland Historical, a free mobile app developed by the Center for Public History and Digital Humanities at Cleveland State University, included a tour of Coventry Village among their menu of curated walking tours around Cleveland. Cleveland Historical’s tours are map-based, but they offer so much more. The site seeks, in the words of former center co-director Mark Tebeau, to “curate the city through layers of interpretive storytelling, with a particular emphasis on multimedia and especially sound.” The key words here are “interpretive,” “layer,” and multimedia.” The walking tours curated by Cleveland Historical don’t just offer photos of sites marked on a map with a brief description of that site’s history. These tours tell a story, and they use text, photos, and brief audio clips from their large oral history collection to do so. Most of the twenty stops on the Coventry Village Tour included a 500-600 word interpretive essay, six to eight photos, and as many as five audio clips of one to two minutes in length, each briefly described so the user knows the subject of the clip. Each stop also includes an interactive map that shows the precise location of the building or event being described. Users can locate themselves on the map so they can see where they are standing in relation to the mapped item.

Cleveland Historical favors two practices that I found particularly compelling. First, by embedding oral history audio clips into their geolocated walking tours, they allow the user to actually hear the voices of the people they are reading about right in the landscape where these stories took place. I learned a lot about Coventry Village that I did not know through this walking tour. While standing in front of Tommy’s Restaurant, I was able to listen to the restaurant’s owner and founder explain that he began offering Lebanese food like hummus back in the 1970s because he had once worked for a Lebanese man and discovered how much people liked the food his boss brought from home for lunch. I found it very engaging to hear Tommy himself tell the story of his restaurant while I was standing outside the store and scrolling through the historic photos that are part of the walking tour stop.

But I was even more taken with their second core practice: their insistence that active human curation is vital to understanding a sense of place. Some walking tour stops are more like encyclopedia entries—they offer a bunch of general information about the subject of that stop. But Cleveland Historical tours use “an interpretive perspective,” as Tebeau describes it. The Coventry Village tour as a whole told a story about the evolution of the Coventry neighborhood, from its beginnings as a commercial center in the 1920s, when it was primarily a Jewish neighborhood, to its evolution into a center of Cleveland’s counterculture replete with motorcycle gangs in the 1960s and 1970s, to efforts to make the neighborhood more commercial and family friendly starting in the 1990s. While each individual tour stop could stand on its own, read together the different entries developed themes and broader historical narratives. The interpretive framework also provided historical context that added depth to the material. Users don’t just learn that the neighborhood was once Jewish, but are able to read a little about the migration of Jews to Cleveland and the reasons their neighborhoods moved further east over time. Similarly, the tour helps locate the changes Coventry has undergone within the broader history of gentrification and the economic history of Cleveland. I walked away from this tour, in short, not just knowing more about the specific businesses on Coventry Street, but with a better understanding of the history of entire region.

While I found much to love about Cleveland Historical’s walking tours, and I thought the entries for each stop were well-written and the photos and oral histories carefully and thoughtfully selected, doing the tour one sunny afternoon also reminded me of some of the drawbacks of walking through the landscape as if it were a living museum. Five to six hundred word entries take a long time to read. I often had to stop and find a place to stand where I wasn’t blocking foot traffic just to be able to read the entries fully. I was constantly searching for canopies or shaded spots because my cell phone screen was hard to see while standing out in the sun. At some of the stops, it would have taken me nearly ten minutes to get through all of the content, so I found myself being very selective about which clips to listen to and how much to read. In some ways, I was able to engage with the site more fully when looking at the same tour later at my home computer. But at the same time, it was wonderful to be standing right in front of the sculptured entry gates to Coventry Peace Park when I learned that the gates had been designed by one of my current neighbors. The immediacy of place, in this case, absolutely enhanced my experience.

Cleveland Historical wants its tours to communicate a sense of place in a visceral way through its layered interpretations with text, images, and sound. Its tour of Coventry Village did this that; it helped me better understand my own history and identity in relation to this particular place.