For my final project for History 689 I am creating a website that uses the history of the debate over American intervention in World War II to help teach students how to ask historical research questions. I initially envisioned a site that used this debate to cover all different kinds of historical thinking skills, but I’ve begun to narrow my focus (while also planning to include some other aspects of historical thinking–issues of sourcing, context, causality–in the different exercises.

There is an extraordinary amount of primary source material that I could use in this project. Primary sources about this debate that took place from 1939 until 1941 about whether the United States should aid Britain in its fight against the Nazis include (but are not limited to), editorial cartoons; newspaper articles and editorials; the records and materials produced by organizations like the America First Committee and the Committee to Aid America by Defending the Allies; propaganda posters; photos; public opinion poll data; and speeches by people on both sides of the debate (some of which are available as audio or video recordings). For this project, the challenge will be choosing what to include from among the many available sources. Right now I am thinking that the project might include primary sources in the following ways:

I may also include a library/archive of other sources as a resource, although I haven’t decided about that yet and it may depend on how the site takes shape.

One visual that I definitely plan to use (and I hope to do a google slide presentation of the sort done in the student project on cartoons about the Caribbean that we saw in class last week) is this photo of women from the America First Committee, the Mother’s Crusade, and Keep America out of War picketing British Ambassador to the United States, Lord Halifax, in Chicago on May 8, 1941. 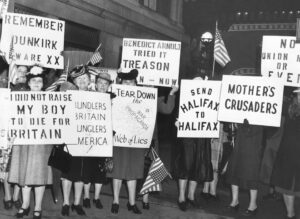 I chose this image because I think there is so much here to uncover and analyze. First off there is the simple fact that here we have a group of women, mainly middle-aged or older, all wearing solidly middle-class clothing, engaging in a public act of political protest. Each of them carries a sign that offers evidence about why these women were opposed to American intervention, how they framed their opposition, and what arguments they thought would resonate with the public. Several signs make clear that some of the women are portraying themselves and organizing as mothers who are opposed to sending their sons overseas. The signs offer a critique of Britain’s war efforts so far, imply intervention is a form of treason, and portray war propaganda as a web of lies and deceit. The photo also raises questions about how American isolationist groups were organizing and mobilizing to keep America out of the war and why they were targeting appearances by the British ambassador.

I plan to help my audience analyze this source by creating a google slideshow that breaks the photo down into smaller parts to encourage them to interrogate every aspect of evidence the photo includes. It will also raise questions about what we don’t know about this photo–I don’t know who took it or where exactly these women were (although I have found a schedule from Lord Halifax’s visit to Chicago). The slide show will go on to offer some context that can deepen an understanding of the photo as a historical source. It will then model how broader historical research questions may arise from a close analysis of this particularly source. Several that come to mind immediately are: How and to what extent did female anti-interventionists deploy maternalist arguments and rhetoric to make their case? What role did women play in the anti-interventionist movement and did their activism differ from those of male anti-interventionists? What kinds of ideas or ideological framework underlay claims that supporting Britain could be considered a form of treason? What was Lord Halifax doing in Chicago that made these women want to come out to protest? (which could lead to an interesting research paper on British efforts to sway domestic opinion in the U.S to become involved in the war).