Social media, it’s safe to say, is outside my comfort zone. I, like most other Americans, have a Facebook page, I’ve experimented with tweeting, and I even have a web page. But I certainly recognize myself as one of those academics who have questions about the benefits of using social media to promote my work. I hope to change that by developing concrete social media strategies to share my final project for my Introduction to Digital Humanities class, which is a scalar project based on my original research about the commemoration of Daniel Decatur Emmett in his hometown of Mount Vernon, Ohio.

First, a little about the project and its inception: Dan Emmett was a well-known blackface performer in the nineteenth century. In 1841, he founded the Virginia Minstrels, which was the first 4-man blackface troupe. Emmett was also a prolific composer whose works include well-known songs such as “Old Dan Tucker,” “Turkey in the Straw,” and most famously, “Dixie.” This project grew out of both my scholarly interests—I study historical memory, race, and commemoration—and my personal experience, having moved to the Mount Vernon area in 2014. Living in this town, I wanted to find out how Dan Emmett became so central to the town’s civic identity, who was responsible for preserving his memory, and whether there have been concerns or debates about celebrating a blackface minstrel performer whose most famous song became an anthem for the Confederacy and (for many) a symbol of racism. 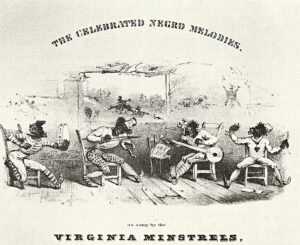 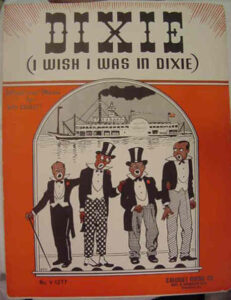 This project is not just work a work of history, but also seeks to encourage contemporary community engagement. Mount Vernon’s celebration of Dan Emmett today makes many of the county’s residents of color uncomfortable and unwelcome. Yet many of the area’s white residents (and the county is 96% white) don’t understand why blackface performance or “Dixie” are considered racist. White local supporters of Emmett have, moreover, developed a range of arguments that excuse or minimize the racist implications of commemorating him and his most famous song.

This project, then, seeks to reach multiple target audiences. Local residents in Mount Vernon,  especially those who are active in civic organizations, are one key target audience for this work. A second target audience is scholars and a broader public who are interested in the history of race and commemoration, and especially in the debate over Confederate monuments (one of the arguments of my project is that Confederate heritage organizations promoted the commemoration of Emmett and “Dixie,” and that in some ways, monuments to him are a form of hidden memorials to the Confederacy). Finally, I want the work to reach an audience of professionals in the world of academia and public history. I hope to use this project to help build my own professional reputation and to become better connected with peers working in the field of public history. I hope to reach these three different target audiences through tailored social media campaigns.

Social Media Campaign #1: Mount Vernon residents
Audience: The audience I am trying to reach in Mount Vernon is predominantly white and somewhat older than average—most of the volunteers at the local historical society, for example, are over 65, as are many of those residents who are most active in local civic organizations. About 25% of county residents have a BA degree or higher, a significantly lower number than the 35% of Americans nationwide who have a BA or higher.

Platform: Given the age, racial demographic, and educational background of my intended audience in Mount Vernon, Facebook and Blogging are likely the most useful social media platforms to use locally. I plan, first, to set up a blog that can be linked to my existing web page where I can offer weekly thoughts on the project, responses to it, and ongoing research questions. I also intend to set up a Facebook page that can serve as a site to discuss and explore the commemoration of Dan Emmett. There I can share aspects of the project and also invite comments and personal reflections. There are numerous local Facebook pages in Mount Vernon that cater to different groups and I would try to use those existing group pages to share information about the new Facebook site. Facebook would also be a site to advertise and share blog posts. I do, wonder, however, if I might need to reach beyond traditional social media to raise awareness of this project (for example by creating postcards or fliers that could be left at the local historical society and the public library).

Messages: The main message of social media campaign aimed at local Mount Vernon residents would be that this project offers a way to learn local history and to develop a deeper understanding of a figure who has played an important role in the community. The campaign would also stress that the project aims to encourage dialogue about the commemoration of Emmett and Dixie and to capture local stories that relate to this history.

Assessment: I would assess the success of this strategy by tracking the quantity and quality of comments received on the Facebook page and the blog. I would look at how many different people were leaving comments and what sectors of the community they represented. I would track shares as a way to assess the reach of each post. The ultimate goal of this project is to contribute to a more active dialogue in town about both the history and the commemoration of Emmett and Dixie today, so one metric of success would be whether it helps generate conversation in among area residents.

Social Media Campaign #2: Scholars and Public Interested in Race and Commemoration
Audience: This campaign would aim to build an audience for my project among scholars and a broader general public interested in the issues of race and commemoration today. I would hope to reach activists who are organizing to try to remove Confederate monuments, as well as scholars and other public commentator who are writing and thinking about this country’s history of racial commemoration. Many of the people who are politically engaged in this work are young people of color, so my strategy needs to be designed to reach 18-29 year old African Americans, as well as an older racially diverse audience

Platforms: The key platforms for this campaign would be Twitter and Instagram. Twitter is popular with young people of color, as well as influential scholars. Instagram is surging with younger users right now and is  a good site for messaging through visuals, which would work with this project. I plan to create a new Twitter account fr the project and to tweet at least three times a week about issues related to race and commemoration, to share ideas from my research, and to encourage conversation about a broader reckoning with America’s history of racist commemoration. To help build a base of followers, I plan to identify several key Twitter influencers in the area of historical memory/Confederate monuments and reach out to them directly to ask them to retweet my posts. I will also retweet posts that will help build my network of connections. On Instagram, I will post interesting visuals with very short commentary and will put a link to the project in my bio section. I would also use existing media to bring attention to my project; for example, I could develop a blog post into an op-ed piece that I could try to place with the Washington Post, TruthOut, or the Huffington Post. That piece could direct people to both the project and my blog about the project and could include a link to the Twitter and Instagram accounts.

Message: The message for this campaign would be that the America has a long and complicated history of commemorating racially vexed figures and practices and that the commemoration of Emmett is an example of a hidden Confederate history outside the South. This campaign will also focus on the message of what support for the commemoration of a figure like Dan Emmett reveals about the mindset and worldview of white Americans.

Assessment: A metric to assess this strategy would be how many people are following my tweets, whether the work is being retweeted, and by whom it’s being retweeted. The goal would be to have word of the project and the issues it covers retweeted widely and connected to other ongoing work to challenge America’s public landscape. I would also keep track of how many people visit the blog site and share the blog. Another metric of success would be whether I was invited to participate in panels, conversations, and conferences related to race and commemoration on the basis of my work on this project.

Social Media Campaign #3: Professional Development
Audience: The audience for this campaign is other historians and especially public history professionals. This is a highly educated audience (most will have MAs or PhDs), and most will be between the ages of 30-65. This field is unfortunately not as diverse as it should be.

Platforms: To reach this audience, I would build on the Facebook, blog, Twitter, and Instagram strategies that I am using with other audiences, but I would add to that by also using LinkedIn and professional networks to advertise the project and my work on it (I could post information about and a link to the project, for example on listservs focused on historical memory, public history, digital history). I would also use my personal website to publicize the project.

Message: For this audience, the message would be more about my professional background and the new directions that I am taking in my work. The core message would be that I am interested in the field of digital and public history, that I have begun working in these areas, and that I am eager to connect and collaborate with others in these fields.

Assessment: To assess the success of this strategy, I would track whether any my work (whether through Tweets, blog, Facebook, etc) is being shared or discussed by professionals in the field of public history. I will also track visitors to my LinkedIn page. Another metric of success would be whether my postings on listservs led to any queries or to any visits to the project site (although I don’t know how specifically to track the folks who might visit the project unless there is a survey that asks them about their interests).